Let me rephrase that, a giant step back. South Dakota’s state legislator, in all its brilliant legal fortitude, has passed a bill that will ban abortion in all forms except when a woman’s life is in jeopardy. Frankly I am surprised that they made that exception; of course there is no loophole for rape or incest. I am sure that this mostly white, mostly male legislature has the best interest of every woman in South Dakota in mind, after all they have decided that those women can not make their own decisions, they will make them for her. If the Governor (another white guy) signs this law, it will go into effect July 1rst, unless Planned Parenthood and other groups can suspend the ban while they fight this battle in the courts. I am so overwhelmed by the problems of this ban that I hardly know where to begin. Of course the problems with South Dakota are a manifestation of all the problems that plague the abortion controversy.
First and foremost both sides of this issue are fighting for a legal decision that doesn’t really work to solve the problem of unwanted pregnancy. Making abortion legal or illegal is like putting a band-aid on a gaping head wound. For me the issue is altogether different. I don’t think abortion should be illegal, we can not forget the deaths of women in back alley clinics and at the hands of unlicensed doctors. But we can strive to make abortion obsolete. To start, make sex education mandatory and forget that abstinence crap, I mean real sex education. And then make gynecological services and birth control available and easy to get. This plan, of course, will not stop all unwanted pregnancy, but it will stop a lot and that is the point isn’t it?
Of course the righteous right, the same white men in South Dakota who think that they should decided what women do with their bodies, have a major problem not only with abortion, but with both sex education and the availability of birth control. Why? Because they believe that both will teach and encourage teens to have sex and while we’re at it, birth control is just abortion in a shiny package. I will say this once and only once, the idea that sex education teaches kids how to have sex is the most fallacious argument I have ever heard. Humans do not have to learn to have sex, they will always figure it out for the simple fact that we are, at our most primordial, really just animals that are driven to have sex. It is hardwired into our DNA, mother natures little tricky way of ensuring the propagation of the species. Of course that may be too close to Darwin and evolution to convince the great state senators and congressman of South Dakota.
The problem of easy access to birth control is altogether a different issue for those that believe birth control itself is a sin. And that would be fine if they kept that notion in the privacy of their own lives and churches, but they don’t. What is my problem here? Simply put, no matter what direction our country has been headed in the last 6 years, we still have a little something called the separation of church and state. This means that to avoid becoming a theocracy, you know like the Taliban, no religious ideology can be the foundation upon which laws can be based. Would this argument convince the anonymous donor of $1 million to fight and uphold the ban in South Dakota to instead take that money and invest in education and birth control? Probably not. Would this also convince those that think that because God says something, (spurious because no one I know has God’s cell number and the Bible is first only inspired by God, who had to rely on fallible humans to write down what he said correctly, and second currently what King James thought we should read), that the rest of the country should follow along whether or not they worship the Christian God or another or any for that matter. And while we’re at it, how do these people plan on helping women when they choose to actually give birth? Well by cutting welfare benefits, and helpful things like affordable and subsidized daycare. So they care that women have babies, but not so much about them when they leave the hospital. Then that same woman and child are drains on the welfare system and lazy, bad citizenry.
Like many who to often take their rights for granted, I think that this legal battle will be a wake-up call for us, that in the eyes of the law and lawmakers our Civil Rights mean about as much as those of the prisoners in Gitmo. And if we are not advocates for men, women and children, no one else will take up the cause.
Posted by mountainmomma at 10:46 AM 1 comment:

I have a girl crush

It is official, I have a girl crush on Tanith Belbin. Now first of all everyone reading this get your mind out of the gutter, I know they are there because I know all of you! A girl crush is simply when one girl admires another girl for her good hair, or nails, and/or because she is hip, stylish, cool, someone with great self-confidence or brains. 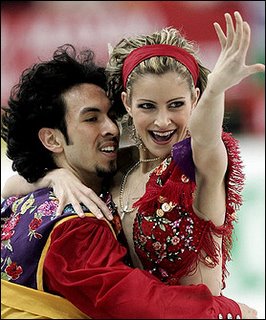 I have had girl crushes before, when I was at ISU I always saw this girl who knew how to put together an outfit, and she always had great shoes, and anyone who knows me knows how I worship at the alter of shoes. And of course I am always fascinated by those girls who walk around with their head high because they know they are it, even if not everyone else knows it. A girl crush may influence your own style or attitude about yourself or fashion ect. So basically a girl crush lets one admire someone sometimes for purely material reasons or for quality you would like to possess.

As to my new girl crush, Tanith is the American ice dancer who just won the first silver medal for the US in this sport. First of all, I love this woman’s hair. It is just cool and funky and has that great texture that I have always wanted but never been able to achieve because my hair is just too curly. She also has great makeup. Okay maybe she has someone to do it for her, but either way I admire anyone who can wield eye shadow like that. I have never been able to do eye shadow very well, I never pick the right colors nor do I know how to layer them. Yes I almost have a PhD, but Cosmo’s detailed instructions about painting your eyes by numbers go right over my head. Tanith also seems to exude the kind of grace I can never seem to achieve. I will leave the physical part of that alone because I was born a klutz and try as I might I will always trip over my own feet in my fabulous boots. I have always wished that I could almost glide around with an elegant lift to my head, but my chin is usually down so I can see where I am stepping. but more than that I am more loud and goofy then I am elegant, something I will just have to live with.

Girl crushes are always great because they could give you a fashion boost, but more importantly because that admiration is usually more about attitude than anything else, and let’s face it us girls have to stick together. If we can get a self-esteem boost by channeling our girl crush, more power to us. And for every girl crush we have, we can rest safe in the knowledge that there is someone out there crushing on us.
Posted by mountainmomma at 8:12 PM 1 comment:

No one mourns the wicked……

So I have found my new obsession. Now anyone who know me knows that I get obsessed fairly often and while some things stick (knitting) others don’t and eventually I get bored and move on. But I think this one will stick, most likely because I love musical theatre already.

I had heard of the musical Wicked before, from like minded theatre loving friends, and to be quite frank I’m an English professor, which means that a vast majority of my friends are like minded. But it wasn’t until MomP let me download her copy of the original cast recording that I really got into it. And now, my love has grown to near epic Rent-like proportions. I downloaded the soundtrack into my ipod (well Jeff’s ipod that is now my ipod) and have been happily singing along since, especially while I work. Of course I knew I would like the music, especially when I found out that Idina Menzel, the original Maureen in Rent, was the original Elphaba (the wicked witch of the west). My favorite right now is “This Feeling”, which is funny because I know people that I would like to sing this song to! MomP had seen and loved it and my Jennie saw it in DC over Christmas and gave a glowing review. Of course now I would like to see it on stage, but as you know I live in West Virginia, which is not too much a Mecca for musical theatre (although Jane Monheit is coming this weekend and we have plans to go see her).

So I went online to find the tour schedule and lo and behold Wicked will be in Cincinnati the weekend we will be there in March for a friends wedding. This is also the weekend before Spring break, so there will be no rush to get back. This has initiated the search for two tickets that don’t have me stuck behind some pole, but so far no luck. Well I shouldn’t say that because Jeff did find tickets for $145 a person, but I felt that at that price I would be the one in the theatre and Jeff would have to wait outside. We are still looking, so wish us luck! On a happier note Amazon has the release date for the Rent DVD as Feb. 21rst. Who knew the damn thing would come out so soon, but I for one am not complaining, I already have plans to be at the store that Tuesday morning, and no one better be in line in front of me!

That is all from West Virginia tonight; I must go and cheer on the US pairs figure skating team!
Posted by mountainmomma at 5:09 PM 3 comments: