So I wrote this post for my friends at Killarney's, so I thought I would share with you!
Hello all! I know people have been waiting for an update, but I was waiting in the hopes I would have some news for you all, alas, you must wait longer. We are less than a month from Lilly’s estimated due date and are running around trying to get things ready. On Thursday I will be 37 weeks, which is considered full term and thus safe, so they will expect her anytime after that. We have had a few issues, nothing major though. She is measuring big, I know imagine that will the two of us as parents! So we are going next week for an ultrasounds so that they can see just how big she is and if they want to taker her c-section or induce early so she does not get so big she has trouble coming out. My OB does say that nothing good happens after 39 weeks, so he will not let me go past my due date (thank god! I do not want a baby born on Feb. 29th!).

Her nursery is almost done, even with all the drama we had this week. First, we ordered her crib about 6 weeks ago from a local baby boutique, it was tad more expensive, but I figured we were doing our part by using a local merchant rather than a big corporation. Well they called on Tuesday to tell me the crib has been discontinued! Now this happens, I understand that, but come on 6 weeks to let me know? So we go in and they can order another one, it will just take 6 weeks, hello I am due in four! Now she will not sleep in her crib for about a month, but still, I want stuff done! Long story short we got a refund and picked up the exact same crib from Sears for half the price. Oh well, I am a corporate whore! Of course that same day our glider came with some damage to the ottoman. And of course they wanted us to bring the whole thing back, not just the ottoman! I got pissy and Jeff fixed it, so that is that. We are waiting to pick up the last little think Monday, and then we will have nursery pics for you all to marvel at. I think we have done an awesome job, and mostly with stuff we already had!

But I thought you might need some pics to be entertained and hold you over. So here is my fat- 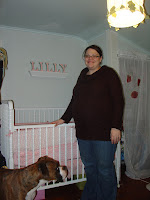 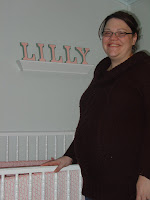 ass standing next to the new crib. I have not put on too much weight, only 23 pounds, but at this point it feels like it is all up front! Here is the bassinet in our bedroom 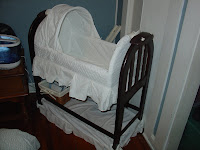 that Lilly will for at least a month. We still have not found it a permanent space, so it is in the corner, but I promise it will not stay there. I like this one because it has a small light and plays music. Last but not least is the downstairs. Since I am not spending my days running up and down stairs we had to have some place for diaper changes and sleeping on the main floor of the house. We moved stuff around and here we are with her Pack and Play, 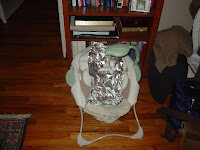 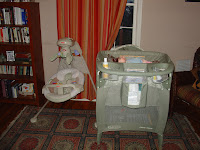 which is huge but also has a diaper changing station which will be super helpful. Here is also her swing and her bouncy seat which I here is a godsend! You will have to forgive the tin foil. Ella and Louie really seemed to enjoy this stuff when we first set it up, so we have had to deter them and the tin foil works, although I feel like one of those crazy people who are trying to keep the CIA from reading my mind!

That is all for now, I will update soon with nursery pics and news about my huge baby!!! Wish me luck!
Posted by mountainmomma at 1:02 PM 2 comments:

Getting ready for Lilly... 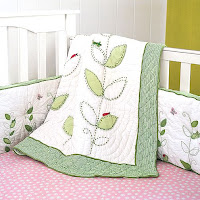 I am in love with this crib bedding from Pottery Barn kids, it is brand new and I just got the catalogue in the mail. I opened it up and there was the perfect bedding to go in the shabby chic garden nursery that we have envisioned. The downside of course is that pottery barn bedding is expensive, I do not mean designer Gucci expensive, but more money than I have planned for or can see myself paying. I mean my bedding came from Target, on clearance and there is very little chance of either Jeff or I spitting up or pooping on it. The point here is that while the bedding is not prohibitatively expensive, I am having a hard time finding the justification for spending the money when there are lots of places to buy bedding that is not as expensive. But on the other hand your first baby only comes along once, so maybe the splurge is worth it and shouldn’t my sweet little girl have the option of peeing on bedding that costs more than the rent in my first apartment? I mean it is not like I am contemplating buying the really expensive rockers from Pottery Barn kids, 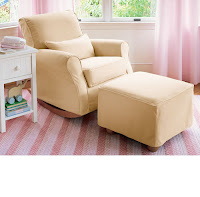 which I also really want. I mean I would probably give my eye teeth for this one, but I do have some self restraint and I know I can probably find something just as good for half off. So it’s not like I am being extravagant, I just really like this bedding and am looking for some good justification for ordering it. This is where you my loyal audience comes in, help me out. Give me some good reasons to convince myself and my husband (ok, really just my husband) that this is the perfect bedding and we should just order it.
Posted by mountainmomma at 1:34 PM No comments: